Posted by John Slinger at 15:46 No comments:

Sir, There is a simple way to resolve people’s well-intentioned but misplaced concerns about the NHS “track and trace” app (letter, May 6). Those who download the app could be allowed to benefit from the loosening of lockdown restrictions; those who see the app as an infringement on their liberties would be required to continue under the present lockdown regime until a vaccine is developed. If this does not work, then using the app should be mandated by legislation.
John Slinger 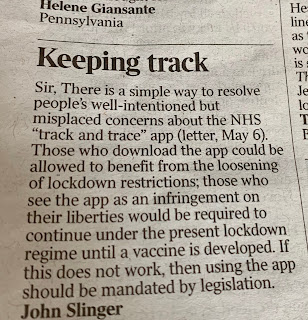 There is a simple way to resolve people’s well-intentioned, but misplaced and concerns regarding the NHS ‘track and trace’ app (Letters, 6 May). Those who download the app will be allowed to benefit from the loosening of lockdown restrictions; those who see the app as an unconscionable infringement on their liberties, will be required to continue under the current lockdown regime until a vaccine is developed. If this compromise doesn’t work, then using the app should be mandated by legislation.

Many good ideas are sacrificed on the altar of civil liberties even under normal circumstances. There could not be more at stake now: the health and lives of hundreds of thousands of fellow citizens; the livelihoods of countless millions; and in a sadly curtailed fashion, ancient liberties such as moving about as we please.
As the government communications team might one day implore us: Download the app; Protect yourself, your community and the NHS; Enjoy greater liberty.
Yours faithfully,

https://www.bbc.co.uk/programmes/m000gczk [note only available to listen in UK at 2h32m]

Presenter: Before we got to the international action, we started with the people he works for now: the refugees sitting in camps around the world, awaiting their fate.

DM: This is a crisis in the advanced world where there are health systems and the debate is about whether they’re going to become overwhelmed. Where there is no health system, it really is a potential disaster. And it’s been a stroke of luck that up to now, Africa, most of the Middle East, Iran aside, South Asia, the main 30 / 35 countries where organisations like the International Rescue Committee are working, haven’t yet been hit by the coronavirus.

But it is a matter of when, not if. There are 99 cases in Lebanon, there are cases now in the Democratic Republic of Congo and so the danger for the people that we serve is absolutely huge.

Presenter: And what can be done?

DM: I think quite a lot can be done. The lessons that we’re learning from the advanced world, about early preventative action; about local trusted actors getting the information across; about protecting health workers; about keeping the economy going – those are lessons that apply in spades in the most fragile parts of the world.

Presenter: Speaking as a former foreign secretary what do you think of the international coordination that there has been or lack if it?

DM: Well what international coordination? I mean I remember 2008/09, I was foreign secretary at the time. Gordon Brown led the most extraordinary global response and he insisted that every department of government was part of it. We created the G20; he created the G20 out of that – the group of twenty leading industrialised nations.

And I’m afraid it speaks to the age that we’re in that there is really no international coordination of an effective kind at the moment. It’s each country for itself, and often it feels like each family for itself. And of course that heightens the danger. At the heart of that, obviously, is the abdication by the United States of its traditional leading role. Britain is obviously withdrawing or has withdrawn from the European Union, so we’re not at the table in the same sort of way. And that multiplies the dangers.

What you do have, that I think is different form the global financial crisis of 2008/09 is that the Chinese very much see themselves as the leaders of this. They see themselves as the leaders on the governmental side, shipping help around the world, but also on the private side, I saw that Jack Ma, the Chinese businessman is sending facemasks to Italy. So you’re seeing a shift in the balance of power; a vacuum if you like, being filled. And that’s obviously got long-term consequences.

Presenter: If the G20 were reinvigorated. The Saudis are the chair at the moment. I mean, what would they do that they are not doing at the moment.

DM: I think there is really two or three things that are obvious. One, there clearly needs to be much greater muscle in the coordinated health effort. The fact that we are talking about a global shortage in facemasks and protective clothing and ventilators, speaks to the fact that there isn’t the kind of health coordination that there needs to be, given that pandemics have been predicted for a long time and this pandemic was first seen ten weeks ago.

Secondly, there’s an obvious economic dimension to this. The fact that President Macron has thrown 300 billion Euros, 12 per cent of the French economy, at this problem shows the kind of global response that’s necessary. And as with everything, the sooner you do it the better it is.

The third thing that I think is also important is that you will want to avoid the kind of perverse behaviour - above all, countries burying their own statistics. You’ve seen that in the undemocratic world in China. Tragically, you’ve seen that in the democratic world in the US. We need to make sure that perverse behaviour that threatens human life is really stamped on.
Posted by John Slinger at 10:39 No comments:

My Times Letter about Rory Stewart’s “kip” with him idea


Rory Stewart says his that his offer to sleep in ordinary Londoners’ homes is about “being in other people's shoes, seeing through their eyes, staying in their houses".

‪If this initiative spreads, perhaps ordinary people may get a reciprocal chance to “kip” in the homes of admirable people from privileged backgrounds, to learn how to do things like run an Iraqi province as a young man, be an MP, serve in the cabinet or stand for leadership of a political party?

As long as it is a two way street, Mr Stewart’s initiative could help different sections of society better understand one another and might speed efforts to make Britain a fairer country. 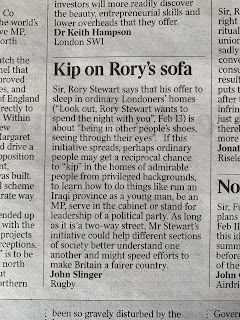 Online here
Posted by John Slinger at 12:02 No comments:

It is refreshing to read that Dominic Cummings has told officials to consider changing investment rules to overcome the bias towards London and the southeast caused by the gross value added system (“Treasury to rip up rules in northern cash boost”, Dec 27). That a Conservative political leadership may compel Whitehall to adapt the mechanism for deciding public expenditure to give preference to the well-being of citizens over the orthodoxies of economics is quite something and will have unpredictable consequences for the Tories and the wider political establishment. Mr Cummings could soon become as much of a nemesis to traditional Tory elites as he has been to the remain campaign or present Labour Party. Quite an achievement. 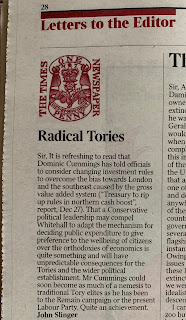 [Unedited version as sent to The Times]


It is refreshing to read (Treasury to rip up public spending rules in cash boost for north and Midlands, 27 December) that Dominic Cummings has apparently told officials to consider changing investment rules to overcome the bias towards London and the south east caused by the gross value added system.


That a Conservative political leadership may compel Whitehall to adapt the mechanism for deciding public expenditure to preference the wellbeing of citizens over the allegedly immutable orthodoxies of economics is quite something and has unpredictable consequences for the Tories and the wider political establishment.

Perhaps Mr Cummings could also direct his radicalism and forcefulness towards other glaring iniquities, such as the lack of affordable housing, due not least to the nimbyism of Tory-voting areas and Tory-run councils that prevents much green field or even brown field development.

Or perhaps he might insist on challenging the conventional wisdom that promotes as inevitable the renewal of an unusable nuclear weapons system at the cost of many tens of billions, while simultaneously, conventional forces are cut to the bone, thereby diminishing the UK’s global influence?

Cummings could soon become as much of a nemesis to traditional Tory elites as he has been to the Remain campaign or the current Labour Party. Quite an achievement.

Posted by John Slinger at 10:19 No comments:

My Times letter on 'Brexiteer petulance'

The behaviour of the Brexit Party MEPs (report, Jul 3) shames the majority of British people who, whether they voted Leave or Remain, regard civility as one of our greatest strengths as a nation. For those of us who continue to believe that membership of the EU is the best option for our country this childish behaviour will spur us on to campaign with civility, determination and strength of purpose.

Posted by John Slinger at 20:35 No comments:

My Rugby Observer letter: why, after 27 years in Labour, I'm now backing Change UK in order to change UK politics

I was a Labour Party activist for 27 years, and stood as a local election candidate several times here in Rugby.

I resigned from Labour in February because the party’s leadership, front bench, NEC and membership is now dominated by the hard left and is not therefore capable of representing the interests of the vast majority of voters in our community, who abhor ideological extremes and seek the ‘three Ps’ of pragmatic, principled and progressive government.

I am now actively supporting Change UK, because they are providing a credible new vehicle to achieve these aims. Their Charter for Remain is clear about providing an alternative “based on the values which we know matter to the British people: a strong economy, our country playing a leading role in the world, protecting our environment, investing in our public services and building a vibrant, healthy democracy where we campaign for our beliefs with decency and respect.”

In a few short weeks Change UK have shown much to their credit: complete honesty and clarity about their Brexit policy of seeking a People’s Vote and supporting Remain; attracting support from across the parties including from former Labour and Tory ministers; taking on Nigel Farage’s Brexit Party; and proposing to change the way in which politics is conducted beyond Brexit. This contrasts markedly with the Conservatives and Labour.

If Rugby voters feel politically homeless, want a fresh start that is devoid of the vested interests of the other main parties, and agree with their clear policy on the EU, I recommend that they consider supporting Change UK in the European Parliament elections and beyond.

Posted by John Slinger at 16:08 No comments: