'Responsibility to Protect' is Sacrificed to Realpolitik by a Morally Weak Transatlantic Alliance
Posted: 18/03/2012 23:00

If the brave reporting of the late Marie Colvin and her colleagues wasn't enough, an analogy may illuminate the moral cowardice of the international community's response in Syria.

Imagine a team of heavily-armed police officers in a park witnessing an unarmed woman being raped by a smaller group of lightly-armed men. She resists and cries out for help. Instead of intervening to save her, the police officers seek advice on whether coming to her aid would be legal; debate amongst themselves whether this might put their own lives at risk; and ponder whether other members of the assailants' gang might view their actions as 'taking sides'.

Due to their own humanity and external pressure to act, they speculate that assuming the correct legal clearances, they might at some stage in the future create a fenced off area into which the woman could crawl to avoid future attacks. They rule out immediate prosecution of her attackers but say that a decade later they might establish a special 'Rape Crime Tribunal' to deter future wrongdoing. The former Mayor of the town visits the rapists in an attempt, through exclusively diplomatic means, to end the rape and prevent any provocative intervention by the police. The assailants refuse to desist as long as the woman insists on her right to resist.

Now back to the reality of the pomp of the White House lawn this week. Had Obama and Cameron's words been translated into Russian and Chinese, they might easily have been mistaken for those of President Putin and Premier Wen Jiabao. Cameron referred vaguely to humanitarian aid and said that the US and UK are "trying to achieve transition not trying to foment revolution". Obama talked of the need to "facilitate a soft landing" and how it is "a difficult situation".

Cameron's warning to the Assad regime that "people have to remember that international law has a long reach and has got a long memory", is hardly a credible deterrent, given that it has taken the International Criminal Tribunal for Rwanda 18 years to secure 69 convictions for a genocide which killed 1 million.
These are the same leaders who rightly state that the diplomatic track on Iran is only successful because of the credible threat of military force. By so clearly removing this option from the table, by pouring water on the very flames of freedom they had fanned elsewhere during the Arab Spring, and by not more robustly challenging the diplomatic cover provided by China and Russia, our leaders show that Western resolve and moral leadership is voluble but practically ineffectual.

The civilians of Syria are not living in an analogy; they are paying in blood and suffering as this brutal realpolitik unfolds. Inaction is a form of action and we are failing the brave defenders of freedom in Syria and sending a message to the world that dictators and their allies can be the arbiters of human progress, not people power. This is a tragic indictment of the failure of the international system and the fabled transatlantic alliance to bolster the 'responsibility to protect' and it shames us all. 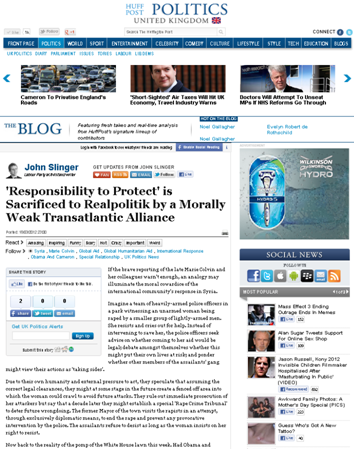 Posted by John Slinger at 10:40 No comments:

My local paper, Rugby Observer, publishes my letter on need for community to stand up to people who let dogs foul

The Rugby Observer published my letter, (see below).

PERSONAL COMMENT: Anti-social behaviour, including dog-fouling, is something I was discussing with police officers and Rugby Borough Council Community Safety Wardens at the Hillmorton Community Forum on Tuesday evening. As a potential Labour Party candidate for the local elections, I take great interest in these issues and know that my colleagues in Rugby Labour are committed to improving people's lives by working with the community and the authorities in this difficult times.

Your correspondent ('name & address supplied') highlights the serious problem of dog-fouling. Such so-called minor crimes, together with littering, vandalism, anti-social behaviour and graffiti, tend not to be the first priority of the authorities, who must tackle more significant threats to life-and-limb within the constraints of ever shrinking resources. However, if we indirectly tolerate dog-fouling, it sends out a corrosive message about the strength, or otherwise, of our community. We will be better able to show one another and the wider world that Rugby is a strong and healthy town if the community works more in tandem with the authorities to enforce the standards of the majority of law-abiding people on the selfish minority.

Rugby Borough Council told me on Twitter that: 'We have found it difficult to catch offenders in the act but we issued 6 penalty notices for dog offences in past year'. While six penalty notices in a year is not much of a deterrent (as anyone living in central Rugby will attest to), their efforts should be encouraged and the community should do all it can to assist the Council in its efforts put an end to the foul behaviour of a minority of dog-owners.

Posted by John Slinger at 10:02 No comments:

The Times publishes my letter calling for a Proud Taxpayers' Alliance

Published in The Times online (here)(£) and in the print edition on Thursday 8 March.

Aside from human nature (some might call it greed), deliberate efforts have been made to create a corrosive, anti-taxpaying milieu. Organisations such as the TaxPayers’ Alliance occupy the airwaves with negative messages about government waste; an army of tax accountants and lawyers advise wealthy individuals and companies how best to avoid paying; and few politicians have the guts to advocate clearly the virtues of paying tax.

Perhaps what is needed is a Proud Taxpayers’ Alliance, which not only sets out the civilising benefits in terms of services which taxes enable, but also exposes tax avoidance as a morally dubious practice, and encourages not just the rich, but all citizens to think of what more they can give, financially or practically, to help to get Britain working again. Then we would all be in it together. 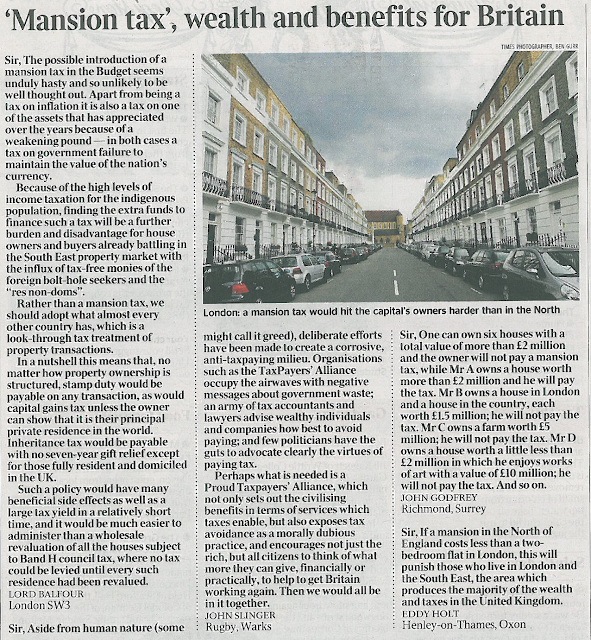 My article on Syria in New Statesman's 'The Staggers' rolling blog


Syria: lessons from history for the west

Members of the Free Syrian Army get ready to leave to an undisclosed location in the outskirts of Qusayr, 15 kms from Homs. Photograph: Getty Images.


All too often, international events bear out the adage that "history teaches us that history teaches us nothing". Lessons from the shameful response of the international community to other crises must inform our policy on Syria.
First, we must not describe events as a "civil war", thereby creating an image in western minds that the combatants are morally or militarily equivalent when this is a cynical perversion of reality. One is the army of a dictatorship attacking civilians; the other are freedom fighters defending a popular uprising of democrats. In the 1990s the "civil war" descriptor was used by John Major, Douglas Hurd and their foreign counterparts, to justify inaction in the face of overwhelming Serb aggression. Tragic consequences followed.
Second, we must not accept that providing solely humanitarian aid satisfies our responsibility to protect civilians in Syria from war crimes. We must not copy the model used in Bosnia of sending in UN-helmeted western troops to protect humanitarian aid convoys, merely to feed today those who will be murdered by a powerful aggressor tomorrow. The so-called "safe havens" of Bosnia seared an image of the wilful impotence of the international community onto the minds of countless dictators, no doubt including Assad and Saddam Hussein. Now is the time for moral potency in bringing to life the growing norm in international relations that, under certain circumstances, we have a "responsibility to protect" when illegitimate governments murder or persecute their own people.
Third, we should recall that much more can be done short of an Iraq-style invasion. We should learn the lessons of the work of Ann Clwyd MP and others who set up the organisation INDICT in 1996 to seek the indictment of Saddam's regime for war crimes. Suffice to say Western governments did not take up this option. The UN Human Rights Council should be encouraged to act on the recent findings of the UN-appointed Independent International Commission of Inquiry on Syria.
Fourth, we must remember the crowing of those opposed to the international liberation of Iraq in 2003 who said at the time: "why invade now for WMDs or oil...why didn't we invade when Saddam was massacring the Kurds and Shias in the 1980s." Western powers did, eventually and under public pressure, do the right thing by the Iraqi Kurds and instituted a no-fly zone and a safe haven which allowed the Kurds to return from the mountains and start building what has become the safest and most prosperous part of Iraq so far. We are now witnessing events akin to those dreadful crimes of the 1980s against humanity and failure to act will reap a terrible future harvest, not least for the people of Syria but for the Middle East and the wider world.
Finally, the Arab Spring has shown that the universal human urge to live in freedom can topple governments unwilling to reform. History will remember those who upheld and protected the rights of people whose desire was not death and destruction, but the dignity of living in freedom. The lessons of history teach us that we must not allow those who disparage and fear such universal forces to be the arbiter of human progress in Syria or elsewhere.
John Slinger is chair of Pragmatic Radicalism and blogs at Slingerblog. He was formerly researcher to Ann Clwyd MP (accompanying her to Baghdad in 2005 & 2006 when she was the Prime Minister's Special Envoy to Iraq on Human Rights).
Posted by John Slinger at 09:55 6 comments: