Guardian letter: Bank of England Governor on "responsible capitalism" sounds like Ed Miliband, who was mocked when he made same points 2 years ago

Here are some sentences from a speech about the nature of present day capitalism given by a leading member of the establishment:
• "Inclusive capitalism is fundamentally about delivering a basic social contract comprised of relative equality of outcomes; equality of opportunity; and fairness across generations."
• "For markets to sustain their legitimacy, they need to be not only effective but also fair. Nowhere is that need more acute than in financial markets; finance has to be trusted."
• "Capitalism loses its sense of moderation when the belief in the power of the market enters the realm of faith."
• "Many supposedly rugged markets were revealed to be cosseted…"
• "We simply cannot take the capitalist system, which produces such plenty and so many solutions, for granted."
• "…by returning to true markets, we can make capitalism more inclusive."
• "Consideration should be given to developing principles of fair markets, codes of conduct for specific markets, and even regulatory obligations within this framework."
• "When bankers become detached from end-users, their only reward becomes money."
Had Ed Miliband uttered these words, he would have been condemned by many in the City and the majority of the Conservative Party, as having been anti-business, anti-City, or even Marxist. Yet these are the words of Mark Carney, Governor of the Bank of England and a former investment banker.
Ed Miliband's speech on "responsible capitalism" in January 2012 was much-derided. It seems that Ed may have found an ally in the governor.John Slinger 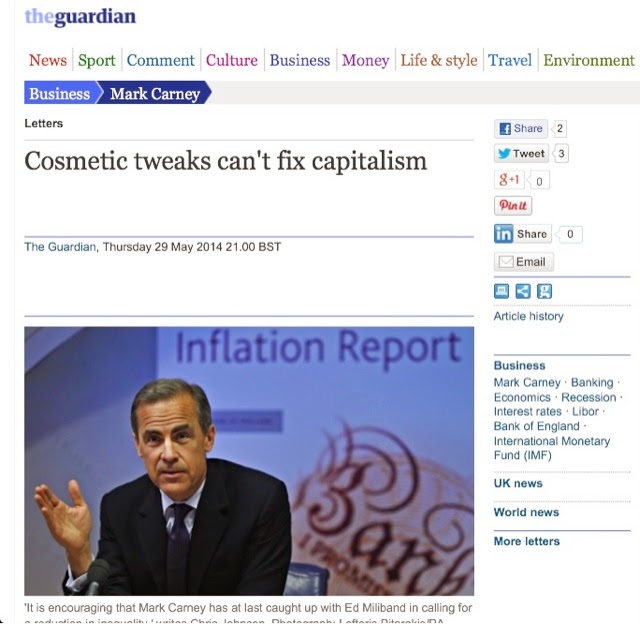 Posted by John Slinger at 21:33 No comments: