My letter in The Observer: Sadiq Khan’s ‘big tent’ is way forward

In his article (“What Labour can learn from my victory”, News, last week), Sadiq Khan said that we “must be able to persuade people who previously voted Conservative that Labour can be trusted with the economy and security as well as improving public services and creating a fairer society”. He spoke of Labour needing to “be a big tent that appeals to everyone – not just its own activists”. It was refreshing that he referenced those who run their own business as well as nurses.

When I and other so-called “moderates” in the party have made such points we have been labelled “disloyal” and told to show “unity”. It is therefore an important step on the road back to credibility as a political force that a politician of such stature, who has just won a historic victory and who has the biggest electoral mandate in Europe, is pointing out what are the obvious truths of British politics.

In the last parliament, Pragmatic Radicalism held events that brought together people from different parts of the party, and from outside it, to present short policy pitches in an inclusive, outward-looking format. Sadiq chaired one of our events, and Jeremy Corbyn pitched a policy that came second in another event.  We cannot win unless we reach out and listen to each other and to the country. 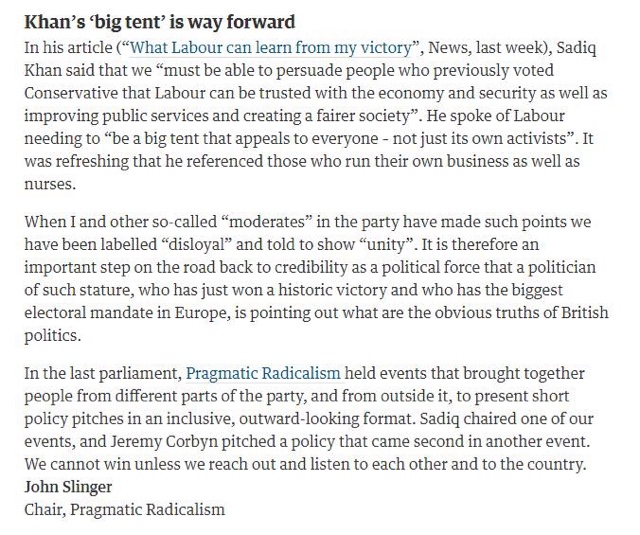 Posted by John Slinger at 21:01 No comments: